The world is spending at least $1.8 trillion a year, equivalent to 2% of global GDP, on subsidies that are driving the destruction of ecosystems and species extinction.

**As published on Business For Nature

Ahead of the last round of CBD negotiations before the UN Biodiversity Conference COP15, The B Team and Business for Nature launch a joint brief called “Financing Our Survival: Building a Nature-Positive Economy through Subsidy Reform”. It summarizes the key messages from a study by subsidy experts Doug Koplow and Ronald Steenblik and aims to inform government and business decision making on Environmentally Harmful Subsidy (EHS) reform.

Government subsidies are created to benefit socioeconomic development, but what if they end up driving the destruction of nature, which our society and economy depend upon to survive and thrive?

Unfortunately, this is the very challenge we face today. A new study commissioned by The B Team and supported by Business for Nature reviewed a wide range of environmentally harmful subsidies (EHS) across sectors and estimates that the world is spending at least $1.8 trillion a year, equivalent to 2% of global GDP, on subsidies that are driving the destruction of ecosystems and species extinction. In other words, public money is financing our own extinction.

However, with political determination and radical public-private sector collaboration, we can reform these harmful subsidies and create opportunities for an equitable, nature-positive and net-zero economy. To do so, we must bring awareness, transparency and disclosure on subsidies from both governments and business. The UN Biodiversity Conference COP15, taking place later this year in Kunming, China, is our best chance to adopt an ambitious Post-2020 Global Biodiversity Framework that includes clear language on subsidy reform and accelerates business action.

What are Environmentally Harmful Subsidies?

EHS are prevalent in a wide range of sectors, including agriculture, construction/housing, forestry, fossil fuels, marine capture fisheries, transport, and water. These sectors account for the vast majority of GHG emissions and impact ecosystems.

Why should we reform EHS?

EHS exacerbates the environmental and social crises that threaten our society, economy and health. The World Economic Forum ranks climate action failure, extreme weather and biodiversity loss as the top three threats facing humanity, fueled in part by the large scale of public money flowing to harmful industries and practices. These environmental challenges in turn worsen social inequalities since the most vulnerable populations are often most impacted by natural disasters.

The scale and nature of EHS demonstrate the size of the challenge and the potential opportunities reform provides, particularly in scaling up sustainable finance. 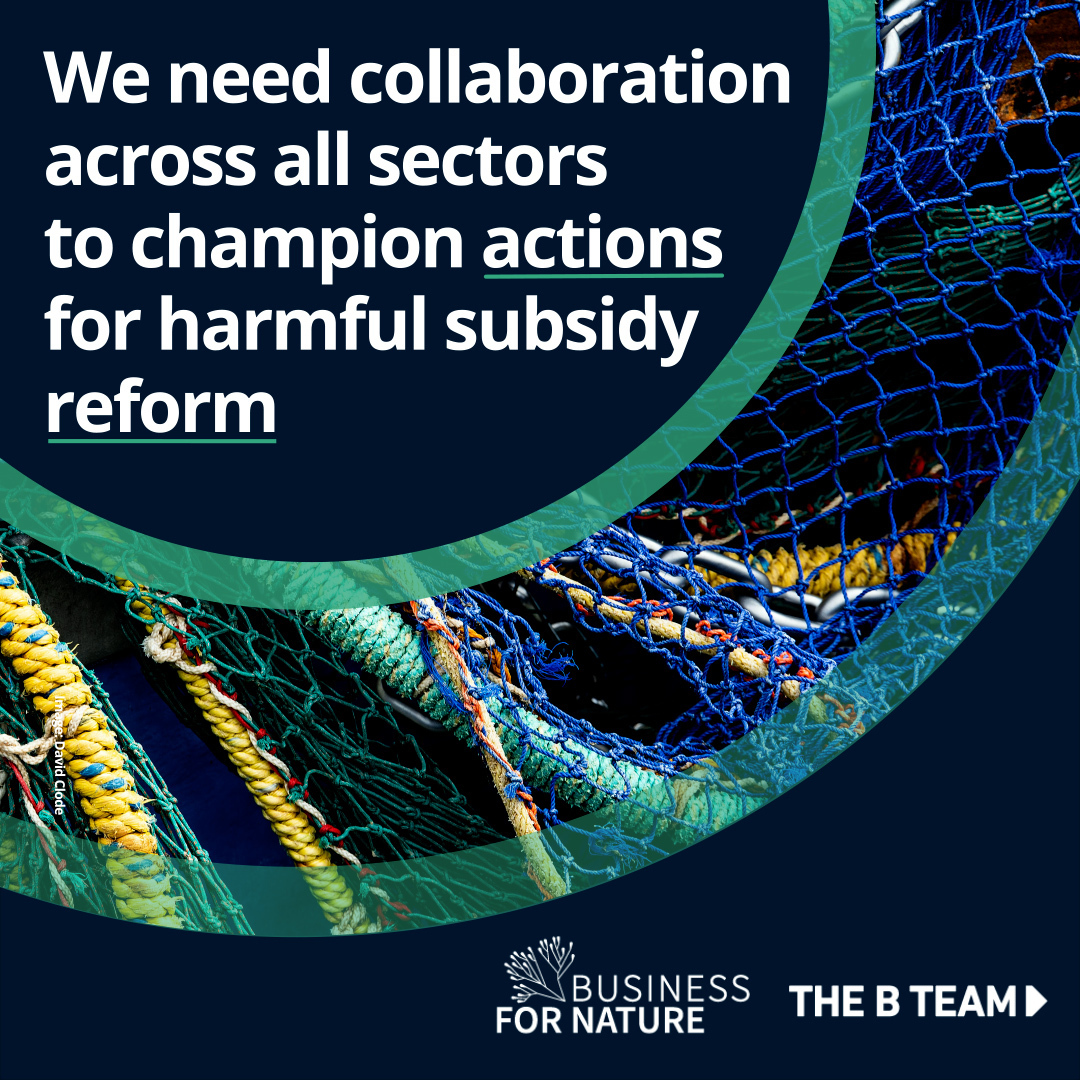 How can we reform EHS?

Subsidy reform must be mindful of the various economic and social forces that come into play, as well as the imperative for a just and equitable transition. Reform managed sensitively means providing support for the poorest households and most vulnerable communities, such as via targeted cash transfers. Greater transparency and a deeper understanding of the financial flows of subsidies are prerequisites to ensuring effective and accountable EHS reform.

To create greater transparency, the primary focus should be disclosure of all subsidies, which will in turn allow experts to accurately evaluate environmentally harmful subsidies and map their flows. A clear and universal monitoring process is also needed for both the governments distributing subsidies and the beneficiaries, in particular businesses, receiving them. Such monitoring must happen across all sectors and over political boundaries. 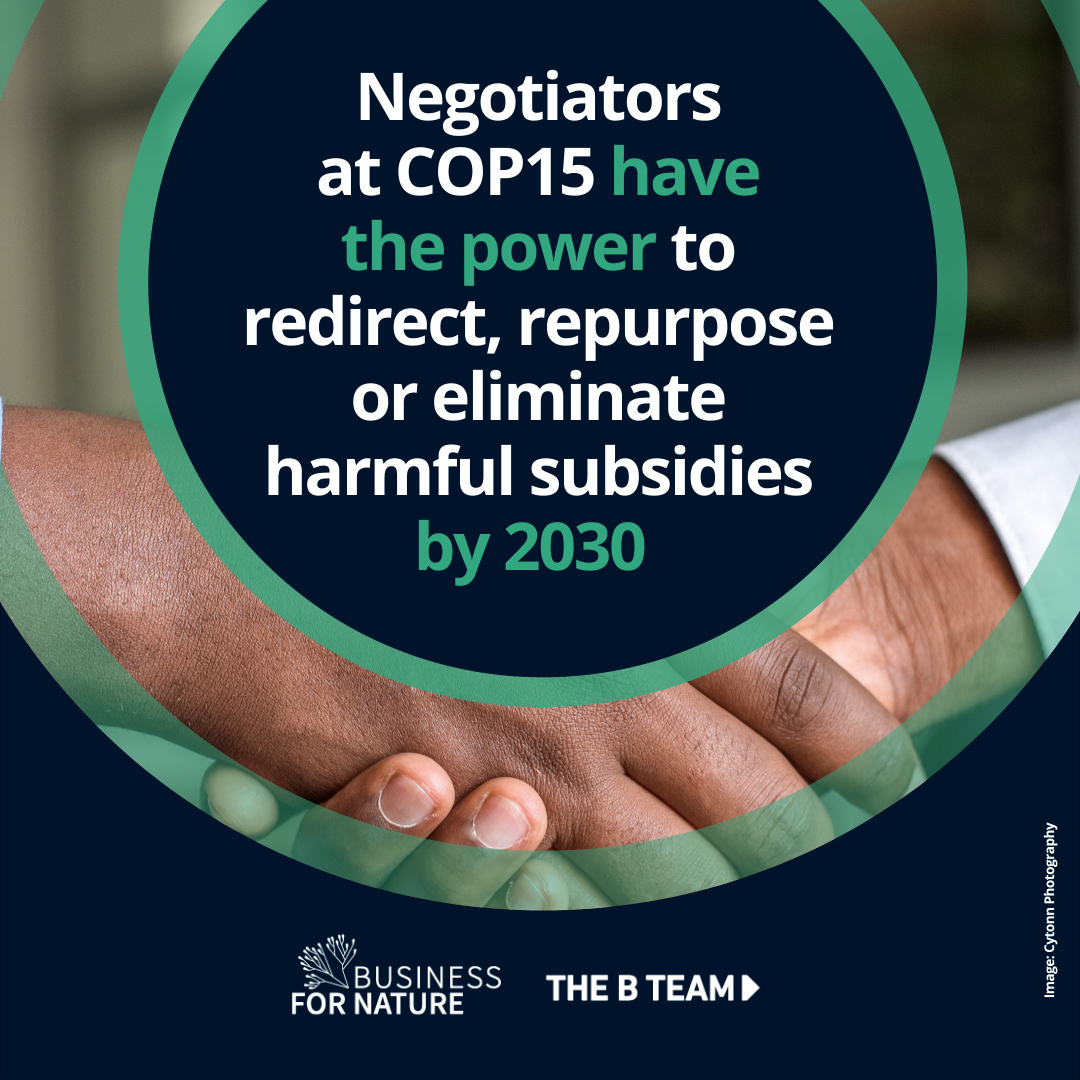 What should governments do?

Redirecting harmful subsidies can lead to many nature-positive outcomes. For example, it can free up substantial government resources to support social needs and local livelihoods, redirect capital towards ecological restoration including nature-based solutions and close the biodiversity finance gap by reducing environmental degradation and unlocking the funding needed to mitigate it.

Call to action for governments at the UN CBD:

Adopt a clear and ambitious target within the Global Biodiversity Framework at the UN Convention on Biological Diversity (CBD COP15) that commits governments to redirect, repurpose, or eliminate all environmentally harmful subsidies by 2030 and increase positive incentives to enable an equitable, net-zero, nature-positive world. 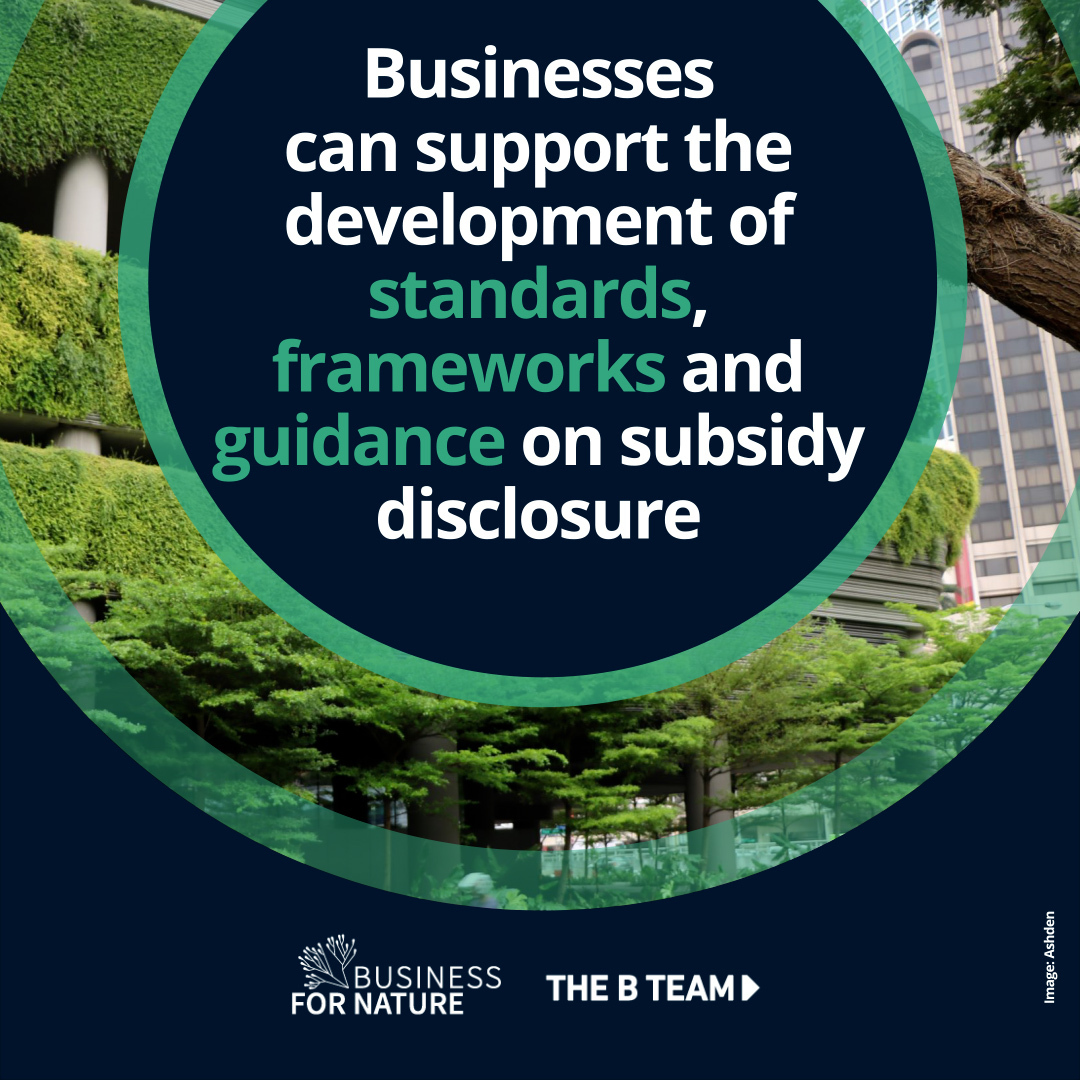 What should businesses do?

Businesses rely on nature at every stage of the value chain, therefore receiving and lobbying for subsidies that harm nature is not sustainable. EHS creates operational, supply chain and reputational risks for businesses, distorts market prices, resource allocation and investment decisions, encourages unsustainable production and consumption in the economy and creates unfair competition.

Forward-looking companies understand they need to prepare for subsidy reform, and investors are also starting to recognize the financial risks of EHS.

Calls to action for businesses and investors: 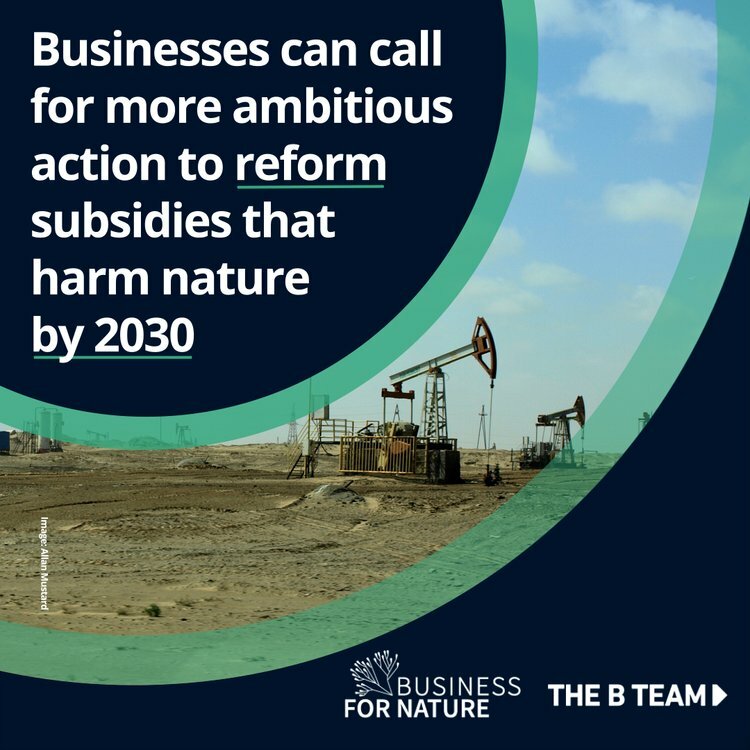 Christiana Figueres, former Executive Secretary of the UNFCCC; Member, The B Team, said: "Nature is declining at an alarming rate, and we have never lived on a planet with so little biodiversity. At least $1.8 trillion is funding the destruction of nature and changing our climate, while creating huge risks for the very businesses who are receiving the subsidies. In the meantime, we still have not met the Paris Agreement climate finance target of $100 billion per year. Harmful subsidies must be redirected towards protecting the climate and nature, rather than financing our own extinction.”

Elizabeth Mrema, Executive Secretary, Convention on Biological Diversity: “This report is critically important. Transformative action on incentives and subsidies harmful for biodiversity will be decisive this decade to bend the curve of biodiversity loss. I strongly believe this timely report will help generate the requisite political momentum and contribute to the global biodiversity framework.”

Mary Robinson, former President of Ireland; Member, The B Team, said: “Climate action is at a crossroads, in part because of the large scale of public money flowing to harmful industries and practices. We need to see thorough subsidy reform from governments and businesses, with social and environmental considerations at the heart, to ensure a just and equitable transition for all."

Jesper Brodin, CEO, Ingka Group (IKEA); Chair, The B Team, commented: “The research is clear, $1.8 trillions are spent every year into supporting the old system. We are in the most important decade when it comes to climate change and reversing nature loss and together, business and government, have an opportunity to reform and redirect these funds to accelerate a just transition for people and the planet.”

Richard Branson, Founder of the Virgin Group; Co-founder, The B Team: “Environmentally harmful subsidies in business stand in the way of every effort to tackle climate change and protect our planet’s fragile ecosystems. We must develop a deeper understanding of their devastating impacts and redirect our resources to the policies that help create a more sustainable future for all.”

Paul Polman, Business leader, campaigner, and co-author of “Net Positive”: “Few are aware of the $1.8 trillion in perverse subsidies dished out by governments globally, which drive environmental degradation, poverty and soon will be the biggest single driver of climate change. It’s time to stop the self-serving, short-sighted lobbying that perpetuates damaging subsidies, instead directing public money towards supporting responsible companies transition to nature positive business models.”

Roberto Marques, Executive Chairman and CEO, Natura &Co, said: “Humanity’s dependency on nature’s ecosystems is not currently reflected in our markets or institutions. As businesses we have an important role to play in catalysing the system change to deliver an equitable, net-zero and nature-positive economy. Together, we must work to realign perverse incentives to bring proper value to nature.”

Shinta Kamdani, CEO, Sintesa Group, Chair of the B20 Indonesia: "Ambitious efforts must be taken to eliminate and redirect Environmentally Harmful Subsidies, in order to transform our economic and financial systems and ensure the creation of a level playing field for businesses globally. As a multi-stakeholder collective of businesses across G20 countries, the B20 Indonesia fully commits to following through with this agenda and accelerating the efforts needed to translate this vision into reality.”

Wiebe Draijer, Chairman of the Managing Board, Rabobank: “We need to look at reforming, repurposing, and redirecting US$1.8 trillion of subsidies that could harm the environment, because this has the potential to transform our economic and financial systems and ensure the creation of a level playing field for businesses globally.”

Read more quotes from business and sustainability leaders in the Press Release.